We have seen the popularity of automated security gates grow over the past decade. One reason for their growth in demand is the fact that these gates have become increasingly more secure and reliable. Many residential properties and apartment complexes are investing in these gates as it helps to prevent intrusion. They are also used in numerous government buildings, power facilities and by large corporations to keep unauthorized people out.

Generally speaking, they are three main categories of automated security gates. You have the swing type gate, the tilt security gate, and the slide gate. Each type has its own unique way of closing and opening, making it best suited for some types of properties.

We go into each type of automated gate in detail below.

A swing gate as the term suggests will consist of a single or two gates that open up horizontally and allow for vehicles and people to pass. When you use single gate assemblies, the gate will open on just one end and then pull inward to close. Double gate assemblies consist of two gates which pull inward and then aside. You’ll find swing automated security gates at mostly private and public properties.

A swing gate is ideally suited for flat driveways that have enough horizontal space. So, you’ll need around 10 feet at least of entry space, without any obstructions. If your driveway is situated across a slope or dip it will not work. If it curves, you’ll still have a problem as there isn’t enough space to open and then align the gate. 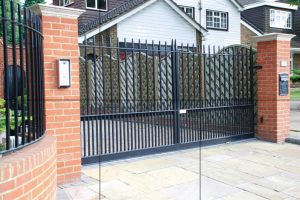 A slide gate consists of either one or two gates which slide horizontally apart and allow vehicles to pass. When there is a single gate assembly, it opens to one side, i.e. it slides in one direction. When a double gate assembly is used, they slide in two opposing directions to give way to vehicles and people.

The most significant benefit of using a slide gate is that they pull away from the entrance. So, the driveway is completely clear. Though if the driveway is narrowly slotted with inclines and slopes you’ll want to avoid it.

Tilt gates are designed to open and close vertically. These types of automated security gates will sit at a 90-degree angle when fully open. So are ideally suited for smaller driveways but which have wide entrances so you’ll often see them in parking lots for mainly highly secure buildings.

To install a tilt gate, you’ll need to have good overhead space. The entryway should be clear of overhanging lights, trees and other stuff which can obstruct it. These are often the gates of choice because they open upward taking up less horizontal space when they are fully open.

Your choice of automated security gates all boils down to what they will be used for. If in doubt, ask a professional to help you choose the right one.

About the Author: Ran Kroynish